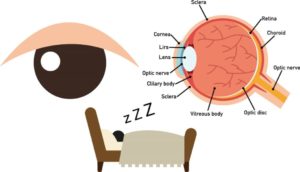 There are both vascular and mechanical factors that are involved in the pathological mechanism of the optic nerve damage:

In conclusion, treating sleep apnea at an early stage helps to limit your susceptibility to larger health issues such as glaucoma, which is one of the leading causes of blindness worldwide. If you are diagnosed with glaucoma and wondering if you have sleep apnea, contact us at Cansleep services to benefit from our free diagnostic test.